IT’S THAT TIME AGAIN FOR ME TO FIGURE OUT HOW FISHING WORKS, FOLKS. My Hulu and/or DVR has some more Wicked Tuna episodes to recap, so I’m on it! Apparently the one I did last week was out of order or something, who even knows. Fishes were caught, yelling happened, let’s just get to this episode where more fishes will be caught and more yelling will happen.

We start this week off on the Tuna.com, where Captain Dave catches a fish straight off, to no one’s surprise. This guy must emit an enchanting musk which attracts 800 pound tuna, because there’s no other reason he gets all the fishes. Unfortunately, they get some thick rope stuck somewhere it shouldn’t be (STORY OF MY LIFE RIGHT BOYS) and they end up losing the fish to the ravages of the surly ocean.

The Haaaaahd Merchandise is on its way out to sea, and the show actually gets a pretty boss shot of the cut bridge. we’re always the first car in line trying to get off the island with 1/8th a tank of gas when this happens. always.

Now over to the Lily, which isn’t like the rest of the boats that have lines and reels and whatnot. The Lily apparently uses a spotter plane and a guy just javelins the metric fuck out of any tuna close enough. This is a pretty hardcore way to fish, I’m pretty sure I saw Tom Hanks with a two-foot beard on that boat somewhere. Unfortunately, they didn’t spear their fish hard enough and it got away. “That was the best opportunity to dart a tuna in awhile”, explains one of the javelin dudes. I’m pretty sure I’ve heard frat bros say the exact same thing outside a dim bar at 3 AM.

Back to some other boat (the Bounty Hunter I guess), someone’s yelling STAHTTHEMOTAHWEREON. I’m not entirely sure what that means but I’m assuming it’s seamen-talk for “Please, shipmate, I believe we have made contact with the species of fish we desire, shall you move the boat to a more favorable position?” A man with the most ridiculous of hats yells “He’s not coming, he’s tight as hell!” And I laugh, because I have the sense of humor of a twelve year old boy. Who let you out of the house wearing this hat? They should be ashamed of themselves.

A fifteen minute portion of this show is now dedicated to how this boat has its fish and line caught in some lobster pots and then another boat’s fishing gear. Literally this is the high drama of this show, some twisted up bits of string. There’s even an INFOGRAPHIC explaining basic physics to the subscribers of National Geographic. I mean the ocean is staggeringly vast, maybe don’t fish 50 feet away from other people and lobster pots? No? Just me? Ok. 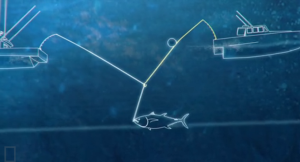 As always, there’s a long boring explanation about HOW BAD WE NEED THIS FISH and THE SEASON ENDS SOON and I want to gouge my eyes out. Spoiler alert: they catch the fish and yell.

You know who isn’t in this episode yet? Stonerboat, who maybe overslept because mom’s basement doesn’t have windows and all. But we’ve got the Hot Tuna, and they’re close behind in the twentysomething deckhands with awful hair category. 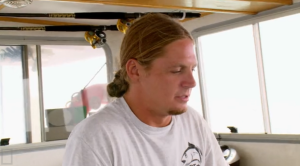 I just assume in the offseason he works at Guitar Center.

The Tuna.com catches another fish and ends up trying to reel it in for NINE FREAKIN’ HOURS. Going into labor with my kids didn’t last that damn long but I was drugged up for that so who knows. They miss the thing with the harpoon five hundred times, and for the first time I actually kind of feel bad. Maybe this show is giving me saltwater Stockholm syndrome. Then I realize how much more money they make than I do, and I don’t feel bad anymore. Crisis averted.

This show is interminable. I feel like I’ve been watching it for hours. It’s no Fishing with John, I’ll tell you. Finally they get this stupid fish and the show is over so I can go to bed.

Stay tuned for next week’s episode, where if a seagull doesn’t steal somebody’s hard-earned sandwich to shake things up, I’m going to scream.

Disclaimer: Despite poking gentle fun at the captains and crew of this show, we actually admire them very much – not only for their hard work, but for helping Gloucester get on the map for something interesting. Please don’t slash our tires.

Also check out KT’s recap of Wicked Tuna episode “Bad Latitude” to hear her describe the reeling. So much reeling.

Here we are, finally, with another episode of Wicked Tuna. If you haven’t read the previous week’s episode recap, this is the deal: I live in Gloucester but know NOTHING about fishing. Nada. Zip. I work inside and the sun burns my retinas if I stay outside too long. I know practically zero fishermen. I’ve also never watched Wicked Tuna before we started this blog, so this is going to be a fun ride. So after the last episode I recapped, I have learned “people catch gigantic tuna in relatively small boats by hand and they’re worth a lot of money”, but that’s the limit of my tuna fishing knowledge. There’s a bunch of boats and a leaderboard that keeps track of who makes the most money. This episode starts out on the Miss Sambvca where one guy is mad and wants to quit because they’re losing money and the other guy drives like Stevie Wonder. Oh wait, they’re brothers. Okay. The bad driver brother has the most Boston accent I’ve ever heard. It’s epic, and should be recorded for all of history so we never forget. Now we’re on the Tuna.com, with the guy I’ve seen at Seaside Graphics now and again making fun of last year’s winners, The Pinwheel, a.k.a Stonerboat.  Stonerboat is my favorite so far. Literally everyone on this boat has three-day beard growth, shaggy hair, and glassy eyes. They look like they fell off a boat cruise featuring a Bob Marley cover band and are now fishing for sustenance. Another drama slow-mo shot of a majestic seagull. No. We’ve gone over this, seagulls are basically pigeons but bigger and hang out near the ocean. Clearly no one watching this has ever had their garbage torn apart and strewn across their driveway by hungry shitbag seagulls or they would punch their TVs in unison. Sorry, Joey C. Now we’re on the Hard Merchandise (pronounced “Haaaahd Mehhchandise”). All I know about this boat is that it sank a couple years ago down the Marine Railways and the captain is in serious back pain and looks like he really likes the Doobie Brothers. “To be successful, you can’t let things slow you down.” More fountains of brilliant philosophy on this show. Back on Stonerboat, there’s some middle school drama catfight going on between them and the Tuna.Com, and there’s some Split Screen Action with Dramatic Music for a few agonizing minutes. Both get fishies on their linesies and shout things like “We need this!” Well yeah, because that’s how you make money, Captain Obvious. Stonerboat’s line breaks, and they all hit the Dissapointment Bong. F/V Tuna catches one and at one point someone jabs it with the handle of a hockey stick. Seriously. I half-expected to hear a whistle and a ref calling someone for a spearing penalty. SPEARING IS A REAL PENALTY IN HOCKEY, GUYS, THAT’S THE JOKE

I’m not sure I love Stonerboat anymore because right now this total bro is talking about “boosting” this and “boost” that and holy shit if I hear the term “boost” one more time I will lose my sympathy for those struggling in the fishing industry. I literally think that “boost” is some kind of drug slang with the kids these days that I don’t understand. The captain, who is most likely a sophomore in high school, is irritated as fuck at Boost Mobile and his lack of fish-catching and “feels like the joke of the tuna fleet.” FARTBALLS, WE LEFT THE NATTY LIGHT ON THE DOCK.

To cement their joke status, they get their anchor hung up on a rock somewhere, which I guess is probably not a thing you’re supposed to do if you’re at all competent at this. As they’re trying to get it out *DRAMATIC MUSIC PLAYING* that one bag of hair is still like “boost! boost” and the rest of the crew is contemplating just kicking him into the sea and waiting a few hours to call the coast guard to report a man overboard. Tuna.com gets another tuna with the same hockey stick. CCM makes a quality hockey stick, apparently. They go back to Gloucester Harbor with two fish and make freakin’ $27,000 for one day of work and a $35 hockey stick. I AM IN THE WRONG BUSINESS. In the last segment of the episode, back at the Sambvca (worst liquor ever, btw), they finally get a fish hooked and land it, so Captain Accent and his brother are super happy. Episode’s over folks, move along. I feel like I am learning about fishing. J/K I am not.

Disclaimer: Despite poking gentle fun at the captains and crew of this show, we actually admire them very much – not only for their hard work, but for helping Gloucester get on the map for something interesting.