Welcome to KT’s Hatesong, where I basically just explain why I hate a song. It’s that simple. It’s right in the title. This week, I’ll be dissecting the steaming pile of shit that is “Black Widow” by Iggy Azalea ft Rita Ora.

Let’s start off with how terrible the entire idea of Iggy Azalea is. She’s worse than a gallon of baby spiders. I am certainly not the first to bring up the idea that she’s a blonde, white Australian girl who is totally using cultural appropriation to make her millions. I think every single hatesong I’ve had so far has involved some level of white people making vanilla versions of traditionally non-Caucasian music.

In case you’re not super familiar with cultural appropriation, Slate writer Brittney Cooper has an amazing definition in her article on Iggy Azalea’s culture co-option:

Appropriation is taking something that doesn’t belong to you and wasn’t made for you, that is not endemic to your experience, that is not necessary for your survival and using it to sound cool and make money.

And this is what Iggy Azalea is all about. Worse, even, is her blatant offensiveness in doing it. She’s a terrible person. She spouts racist lines like “I’m a runaway slave…master.” She has a habit of tweeting awful things like this: 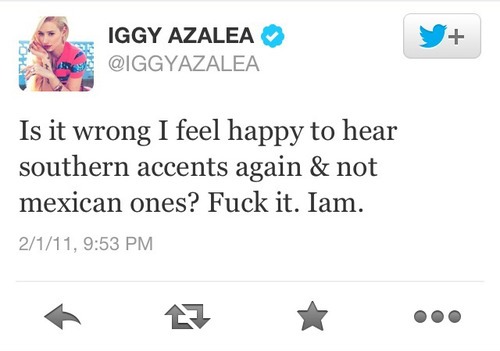 But she’s still famous, even though she’s kind of the worst person in the entire world. She can play at minority fantasies in her videos, but say racist-ass shit on her twitter and in her songs. Ugh. I can’t.

Anyway, here’s why I hate, in particular, Black Widow. First of all, the video is awful. Like unnecessarily awful. There’s like a two minute long segment of her being a waitress with a shitty boss, and then it goes to a bad re-enactment of a Kill Bill scene. Oh, and now there’s poker, and kicking! And a terribly done shot of Iggy and Rita on motorcycles.

The lyrics are the worst. Basically, she’s playing up the mysogynist-as-shit “bitches be crazy” trope. Everyone loves a peppy, upbeat song about being massively unhinged!

Oh hooray! This is not frightening at all. Thanks for portraying women as emotionally unstable, Iggy. Awesome job doing whatever the fuck it is you’re doing.

I can’t even continue about how it’s a bad song and Iggy is bad. You get the picture. The only redeeming quality is that now I know who Rita Ora is (Rihanna, right? She’s the same person as Rihanna?). And that’s it. Iggy keeps coming out with these songs, and people keep listening. I think my head is going to explode.

I swear, there is pop music I like. Just not Iggy Azalea.