[Ed: I (Jim) asked my most excellent cousin Abby to write something for The Clam about coming back to Gloucester after a long time and seeing it afresh. “Maybe make a funny list about Fiesta!” I said. I forgot that she is, like, a real writer and can actually create compelling narratives using language and not just hack together some bullet points with some snarkly captioned pictures. Wow. She is good]

Her reply begins: What I forget about, until yesterday, is that I fucking love the greasy pole competition. If you need to say anything about me, you can say that I grew up in West Gloucester, that I’ve worked as a writer, teacher, and roadie, and that I once crashed a golf-cart into Cher’s giant wire elephant prop.

Yes you read that correctly

Fiesta Sunday After Fifteen Years Abigail Greenbaum My most recent (and, to be honest, only) moment of entry into Gloucester royalty came during an innocent Pre-K romance with the son of a fisherman. We held hands, pretended the jungle gym was a ship (poop deck included), and he told me that his father would bring me a mermaid. Later, checking under my bed for the promised sea-lady, I realized two important things: sometimes boys lie, and Gloucester is a place where unlikely and magical things seem possible. Such as: dozens of men, more than a few in their fifties, dressed as cartoon characters, Hula dancers, animals, and clowns walking along a greased wooden pole in order to grab a flag and some serious honor and glory. I left Gloucester at eighteen, right when some boys my age were starting their careers as greasy pole walkers, and yesterday, after fifteen years living elsewhere, I sat with my father and sister on Pavilion Beach for the championship round. Though my family is neither Italian nor Catholic nor true Gloucester natives, we’ve always loved Fiesta Sunday. My dad attended his first Blessing of the Fleet as a teenager, right after his oldest brother moved to town. Part of me wanted to know if Fiesta Sunday would still feel like magic, the kind of thing that couldn’t happen anywhere else in the world. Part of me just missed the show. You know who else puts on an amazing show? Cher. That’s who.

The teenagers on the beach were taking selfies (#greasypole), and more kayaks and paddleboards clustered around the pole, but other than that, the scene was pretty much as I remembered. Grandmothers threw up their hands at small children as they returned from the shoreline, covered in Saturday’s grease. Girls sported white dresses and great tans. The Seine boats took forever to line up. “Anybody ever thought to use a cable for this?” an old man in a beach chair behind me shouted across the crowd. “St. Peter save us all.” St. Cher on a novena candle

The wind was up for the boat race and the courtesy round, and the walkers were off to a slow start. The older guys seemed to have better style when they fell off, years to perfect the bone-preserving backward dives and flips away from the pole. For the first time, I realized that the only reason anyone ever reached the flag was because in the carnage of the early walks, most of the grease was wiped from the first half of the pole.

Soon, though, the clouds parted and the late afternoon sunlight hit the harbor the way it only does in Gloucester, and the crowd, no longer annoyed about race delays, was cheering every time someone neared the flag. I wished friends from my non-Gloucester life were on the beach with me, because really, how could I ever explain how awesome it is when someone wins, and when the blood and grease-streaked walkers, still half in the water, hoist him on their shoulders?

The carnies, their rides empty, were leaving the festival grounds to watch. Carnies tend to be a tough and jaded bunch, but Fiesta Sunday impresses even them.

Thanks Abby! Even our crappy Cher jokes could not diminsh your awesome! –JD

The Clam’s of a kind staff photographer, Steve Brosnihan, is back again. After a few mix-ups that could be attributed to editor/staffer miscommunication, we decided to give Steve a very easy task. One no one could mess up. We asked him to take some pictures of Fiesta. “Great!” we thought, “He will come back with some excellent photos of confetti, children dressed in white, and carnival rides!”

This is what we got.

While at one of the many parties and late-night open mics we frequent, my machete wielding employers asked me to produce a photo piece about something they call ‘Siesta.’ Over a very loud Fela Kuti cover they described Siesta as a colorful, local event full of pageantry and revelry that goes on for days. I kept trying to connect the revelry to the essence of an afternoon nap taken by Spaniards to evade the hottest hours of the mid-day sun and whereby they can prepare for a late day at work and long, elaborate evening meal. I was intrigued and excited to think that our fair city would host such an abstract, conceptual performance piece annually.  As the music crescendoed with blaring brass and drums, KT described a few puzzling images including something about cross dressers on a greased telephone pole. I never turn down a challenge, especially when enticed to partake in surrealism, so I agreed to take on the assignment. 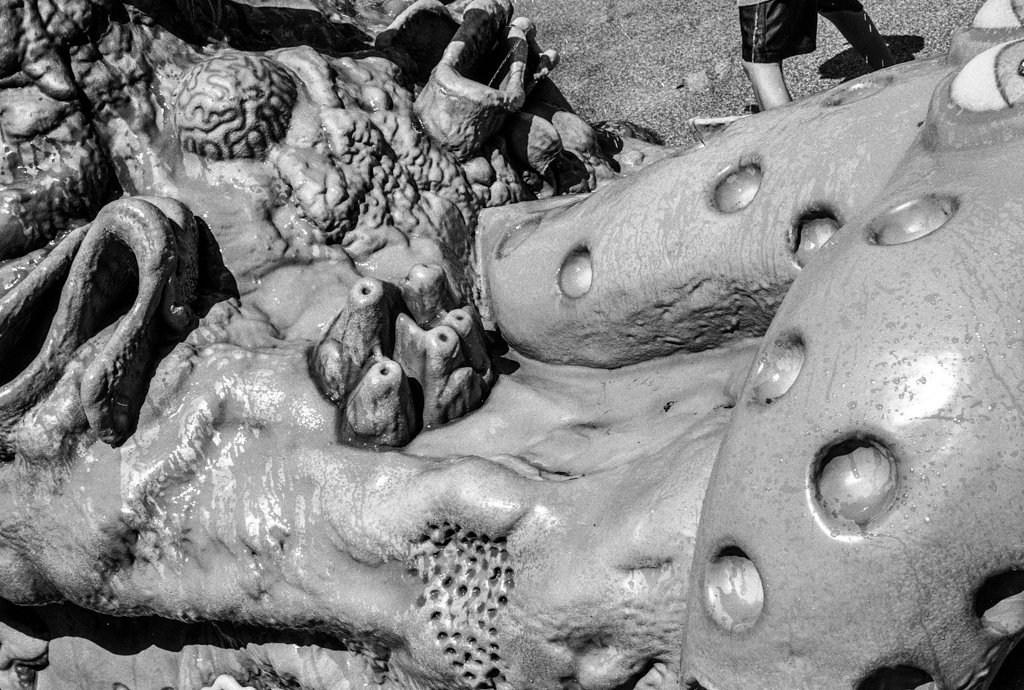 An 11th year blow-in, I consider Gloucester my home now, but this Siesta thing has eluded me. The staffers insisted that I document the event during my annual family camping trip to New Hampshire. We take it right after the kids get out of school at the end of every June. When I mentioned to the Clamsters that I would have to cover Siesta from up there, they shrugged and said “OK.” Conceptual indeed! To get in the mood, I dusted off my old CD of Marcus Miller and Miles Davis playing “Music from Siesta” the soundtrack from the somewhat obscure 1987 art film by Mary Lambert and put it on repeat for the 4 hour drive. If traveling alone, I would have played my vinyl copy, but the 3-axis active turntable isolation gimbal takes up too much space in the family minivan. I had to settle for the grainy harshness of digital. Anything for the kids. For imagery, I loaded some fresh film into my newly acquired Rolleiflex SL 35M sporting a Zeiss licensed 50mm f 1.8 planar: Six blades of Petzval-like bokeh when wide open. The fungus in the lens is minor, worse in the pentaprism, but it’s still a great shooter. Every time I lift the camera to my face, I can smell the basement that the camera must have been stored in for the past 30 years. Odors always activate my memories. This species of mold must have also inhabited the day bed I often napped on as a kid over at my grandmother’s house—a perfect ambiance for the task at hand. In honor of the sixth hour after dawn, all the shots happened under the glare of a bright midday orb.

I briefly toyed with the idea of scheduling our annual camping trip later in the summer next year but finally decided that the mystery of Siesta should forever continue as a haunting dream-state in the annals of my family lore. Viva Siesta!