Drivin’ Up The Wall

Okay, Gloucesterites. We have to talk. We really need to sit down and have A Serious Discussion about something, and I want you to listen up – but we both already know the truth here, don’t we? It’s the elephant in the room. Our deep dark not-heroin-or-pregnancy-related-for-once secret.

We’re a city full of TERRIBLE DRIVERS.  Just awful. On the best of days, it feels like driving in a post-apocalyptic nightmarish cityscape where if a man flinches, the churning hordes will innately sense weakness and rend him asunder. On the worst of days, there’s beach traffic.

Because I’m a deeply introspective person who tends to think of the macroenvironment surrounding my collection of dented vehicles, I set out on a spiritual journey to understand WHY we drive this way. And by “set out on a spiritual journey”, I mean I cracked open a beer. What I found on my Vision Quest (Sponsored by Downeast Cider) may explain our curious driving habits. Let us begin.

– The abysmally narrow roads. In a normal city like Somerville or Mumbai, a road twenty feet wide would be either two-way with no parking, or one way with parking on one side of the street. In Gloucester, twenty feet wide means two way traffic with cars parked halfway on the sidewalk in both directions, but you have to pull over where you can and let opposing traffic pass. Or they have to pull over.

Plenty of room to park, seriously.

Or, you have a “Gloucester Traffic Standoff” which is like a Mexican standoff but with cars and beeping and sometimes a gentle mist of swearing. Apparently, according to a neighbor who turned her car around, followed me to my house, and openly berated me in my driveway, you should also cede right of way to the person who has lived in Gloucester the longest. I could not make this up if I tried.

– It’s a constant monster truck rally. I’ve been here for a decade, my entire twenties, a third of my life. Still, to this day, I am dumbfounded at the subset of Gloucester drivers who carry on as if the roads are their own personal demolition derby. Large, somewhat illegal pickup trucks are a dime a dozen ’round these parts. They come equipped with exhausts that sound like whooping cough, and they screech their tires at any available opportunity like a mating call for the perpetually dense. Almost predictably, these classy stallions of the motoring world are driven by white guys under the age of 35, sometimes shirtless, usually wearing a baseball cap. 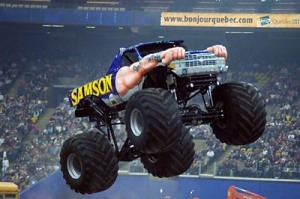 BRB honey, off to get trashbags in my perfectly reasonable mode of transportation.

Let me regale you with a tale from ye olde last week, when my other half got into a very minor traffic accident. He was driving up the mountainous terrain of Commonwealth Ave at a reasonable speed and on the side of the road one is socially obligated to drive on, on his way to pick up our preschooler. Suddenly, a wild truck appeared, cresting the hill. Naturally, the driver thought, “I can’t see the other side of this hill, so it’s a great idea to just drive in the middle of the road as fast as possible! Wee hoo, let’s see if we can catch air at the top!”

Since my spouse has an innate survival instinct, he pulled to the right as much as possible to avoid being smashed like a beer can on a frat boy’s forehead. Unfortunately, he clipped a mirror, and dented our car a bit more. Of course, the offending truck continued blissfully on its path of dumbassery, blind to the consequences of DRIVING IN THE MIDDLE OF THE GODDAMN ROAD, so now our insurance will go up because that guy’s a moron.

– Infrastructure designed by sadists. It appears sometime in Gloucester’s past, we may have hired a thorazine-addled Ray Charles as our city’s street planner. Nothing makes sense. We have swirling masses of one-ways that can pull you in over on Washington street and spit you out by Burnham’s Field when you had a preference for ending up on Main. We have fake-rotaries where no particular rules apply and from which a set of makeshift laws governing them have been handed down from generation to generation, an oral history never committed to DOT approved signage.

All roads lead to this.

And for some reason, we have a multitude of completely unsafe, blind, terrifying street intersections and it seems to not even bother people. There’s nothing like the thrill of pulling out of the end of a street where you can’t see more than 15 feet in either direction, and despite “thickly settled” being an understatement, the traffic is going Ludicrous Speed. It’s like a roulette wheel! Most of the time you can get out safely if you whip your head back and forth enough to check both directions without devolving into an epileptic fit, but once in awhile you get nearly pegged by a National Grid truck whizzing around the corner.

– People who never leave the island. When I first moved here, I had heard tales of those who never left Cape Ann. I imagined these people as a simple, yesteryear folk who believed trolls, socialists, and hell existed beyond the bridges. And now I am one of those people who barely leave. I am totally part of the problem. I work here, I live here, I shop here – I once went 5 weeks and 2 days without leaving Cape Ann entirely accidentally. But this means that without much outside stimuli, we as a people have our societal habits break down. We forget what it’s like in the big, outside world where you can’t park 2 feet from the corner of a major intersection or take up both lanes of a two lane road because it’s Not Cool elsewhere.

– Tourists. In the interest of complete fairness to my people, it isn’t entirely our fault. We have a huge annual influx of visitors, which is wonderful, because our economy needs it to survive and it makes Gloucester awesome. But sweet fuck, tourist drivers are just as bad as the rest of us, if not worse. They don’t use blinkers, don’t wave people through at difficult intersections (THAT’S HOW WE SURVIVE HERE, IT’S THE ONE THING WE DO RIGHT!), and they make sudden movements, like frightened rabbits. They drive 10 under the speed limit all the way to Lanesville because like gosh, Jeff, look at this view, isn’t it just precious? When I see an out of state plate, I have to assume the person behind the wheel has an IQ of “baked potato” and will brake suddenly and swiftly whenever the breeze blows.

All in all, we have a ways to go as far as our vehicular behavior is concerned. It’s an “all of us” problem – I won’t excuse myself from making questionable-at-best driving decisions (constantly misjudging curbs is my weakness). But with a little humor, and a lot of patience, we can make the roads more tolerable. And by “tolerable” I mean I only shit my pants once in a rolling 24-hour period. We can work towards that. I believe in us, Gloucester.